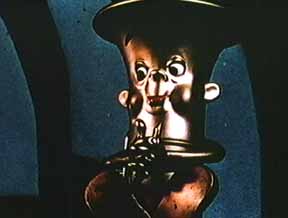 I bought this a while ago and it has become a DVD that I have come to cherish. The Puppetoon Movie was released in 1987 as a tribute and retrospective to stop-motion pioneer George Pal. Pal was responsible not only for the Puppetoons, but also for assisting another young stop-motion animator, Ray Harryhausen, who would soon make his own mark on the film world. After he was finished with the Puppetoons George Pal then went on to producing a number of hit live action films, such as War Of The Worlds and The Time Machine, for which he also created the special effects.

The Puppetoon movie features eleven of the Puppetoon short animated films from the 1930s and 40s. The film is hosted by Art Clokey’s little green clay man Gumby, and his pals Pokey and Arnie the Dinosaur. Arnie explains to Gumby the significance of George Pal and the Puppetoons to stop-motion characters like himself, and then shows Gumby some of the Puppetoons.

Eleven of the Puppetoon animated films are shown in all, but the first four of these, The Little Broadcast and The Big Broadcast of 1938,  Hoola Boola and South Sea Sweethearts and only shown in part.

My favourite Puppetoons are John Henry and the Inky Poo, which retells the African-American folk tale of how railway worker John Henry beat the Inky Poo (a railway track laying machine) in a competition to see which was more efficient at laying railway tracks, but died of exhaustion at the end, and Tubby The Tuba, which tells the story of a Tuba who longs to be able to play a melody rather than just going oompah, oompah. (My explanation doesn’t really do justice to  these films.)

Puppetoons included in the movie are:

Included with the DVD are 12 bonus cartoons which are all a joy to watch.

Hopefully there will be a second Puppetoon DVD soon, as I would like to see some more of these wonderful films, including the two Oscar nominated adaptations that George Pal made of Dr. Seuss stories. These are great pieces of entertainment and it’s is fascinating to see the infancy of stop-motion animation. With the renewed interest in this art form thanks to the likes of  Fantastic Mr. Fox and Coraline we can only hope that Arnold Leibovit and Paramount can see fit to release more of these great films that served as inspiration to today’s stop motion animators,  onto DVD where everyone has the ability to see them.