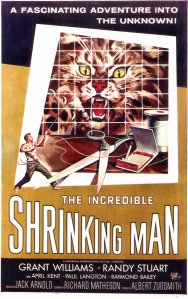 This is another of those fifties sci-fi films that I have been watching lately. This movie is about Scott Carey who after being exposed to a radioactive fog whilst vacationing on his brother’s boat, begins to shrink. The first half of the film deals with Scott trying to come to terms on his condition and the effect that it has with his marriage. The smaller he gets the angrier he gets and the more tyrannically he becomes towards his loving wife Louise.

The 2nd half of the film is where the action begins. By this time Scott is small enough to live in a doll house. After Louise leaves the house for the shops, after being directed to by her increasingly angry husband, the families’ cat is accidentally let into the house, where Scott must try to escape it. The cat knocks him into the basement where he then has to battle a massive tarantula. In the film’s climax, after he gets his freedom Scott realises and accepts that he is not going to ever stop shrinking.

The film is incredibly enjoyable although the special effects are quite corny looking by today’s standards, but very effective. The scenes with the spider are scary enough for this arachnophobe to have to cover his eyes whenever it was on the screen. I only hope that the update that is due out later this year and starring Eddie Murphy (whose career of late has been built solely on playing Donkey in the Shrek films and remaking movies from the 1950s) is half as enjoyable.