The Vanishing Prairie is another of Walt Disney’s True Life Adventures that is contained on the Walt Disney Legacy Collection Volume 2, which I received for Christmas. A couple of days ago I made a post about the other full-length nature documentary contained on the DVD set, The Living Desert. Like its predecessor, The Vanishing Prairie won the Academy Award for best feature-length documentary.

I think I prefer this movie to The Living Desert, perhaps because this film does not focus so much on snakes (although a rattler does appear), spiders and insects. The Vanishing Prairie does have many memorable and enjoyable scenes such as the buffalo giving birth to a calf, the mountain lion cubs growing from kittens to teenagers and the lives of the prairie dogs, which face many dangers in their daily lives.

Paul Smith’s musical score plays a big part in the way that one feels about this movie and while it can be a little clichéd at times, I do think that it is brilliant too.

I think that the best way to treat this is as

entertainment first and then as a nature documentary. When watching this film and The Living Desert I wondered to myself how much of the footage used was genuine and how much was set up or faked. Looking at the extras on the DVD set does give you the answers to this question though which made me quite disappointed, especially since one of the signature sequences of The Vanishing Prairie was faked according to Roy Disney. However there is still a lot of original stuff that they filmed on location and it is all quite fascinating. Still, this is very entertaining stuff which is a complete contrast to the nature documentaries that you see on TV today that I feel are very dry and at times boring.

Here is a different type of Disney movie from what I watched yesterday and something that was considered quite revolutionary at the time. Yes, The Living Desert is a nature documentary but it also came out in 1953, long before National Geographic Channel, Animal Planet, Jacques Cousteau and David Attenborough. This title won the Academy Award for best documentary and it is great viewing indeed.

Unlike most of today’s nature documentaries The Living Desert never takes itself or its subjects too seriously. The main focus of the film is to entertain its audience while also educating them about life in the harsh desert environment of America. There are lots of memorable scenes, especially the sequence showing the mating ritual of the scorpions, as well as the battle between the tarantula and the wasp and the mating ritual of the desert tortoise. The Living Desert is a fascinating film that still is fun to watch today almost sixty years after its release.

One feature about the movie that was criticised for upon its release is the musical score by Paul Smith, which many thought was quite hokey and gives the film its lighthearted feel. I feel that the music is appropriate and is what separates a Disney production from any other nature film. 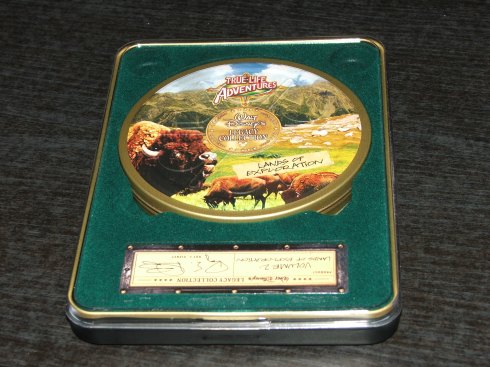 The Living Desert is featured on the Walt Disney Legacy Collection volume 2 which was released a couple of years ago. I actually received this as a Christmas present from my parents and for that I will be eternally grateful. Other Disney True Life Adventures are featured on the DVD set including The Vanishing Prarie which I will write up very soon.