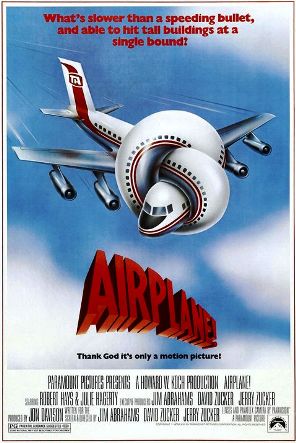 I am serious, and don’t call me Shirley.

Flying High!, which is known as Airplane! in the USA is one of the funniest films ever made. It was showing on Channel 10 last night and I just had to watch it. (Even though I own the DVD!!!)

The movie features lots of gags that just keep coming at the viewer at a fast pace. If one joke doesn’t work it doesn’t matter as there is always another one hot on its heels. Thankfully most of the jokes do work if only because they are just so out there and weird. The film is a spoof of the disaster movie genre

There are a lot of actors in this film such as Lloyd Bridges, Peter Graves and Robert Stack who weren’t really known for comedy. The same can be said for Leslie Nielsen who was a serious actor before Airplane! but became more known for his comedy career since, with films such as the Naked Gun movies. Basketball legend Kareem Abdul-Jabbar also appears in the film as the co-pilot.

Anyway the film is hilarious. Even though I know so many of the jokes off by heart I still found myself laughing out loud very often. In particular Lloyd Bridges had me in stitches every time he said, “This was a bad week to give up…”. Just so friggin’ funny.