Of Mice And Men

The 1939 version Of Mice And Men is a film that has perhaps been forgotten a bit over time, especially when compared to some of the other movies that came out during  1939/40. It is quite easy to forget just how great this movie was and how iconic the performance of Lon Chaney Jr. is as Lennie. I guess part of the reason for it to be forgotten in this country could be because it was banned from being released here in Australia for about twenty or so years, thanks to our diligent Chief Censor Creswell O’Reilly who deemed this film to be morally inappropriate to be screened here because… well actually aft

er watching the film I cannot see any reason for it to be banned other than we were (and probably still are) quite prudish. That there doesn’t seem to have been much outrage at the time that a best picture nominated film was banned from being seen by us Aussies is a bit of a concern.

As I said earlier in this post Lon Chaney’s performance as Lennie is quite iconic and it is a shame that it has been overshadowed by his latter role as the Wolf Man. The Lennie character and Chaney’s portrayal of him we

re parodied numerous times over the next two decades by animators Tex Avery at MGM and Chuck Jones at Warner Bros with the most obvious parody is the Avery cartoon Lonesome Lenny in which Lenny calls Screwball Squirrel ‘George’ and… well see for yourself.

Of course when ever you see a cartoon character talking about ‘tending the rabbits’ they are parodying Chaney.

Also I think Burgess Meredith’s performance as George should be mentioned. Most people only know Meredith as The Penguin from the Batman TV series or as Mickey from the Rocky films, so it is good to see him in his younger days. He gives a great performance as George who is always looking out for the ‘slow witted’ Lennie as can be seen in the final scene where he must make a harrowing decision.

Overall this is a prety good film. I have previously seen the 1980s version with Randy Quaid as Lennie but feel that this version was much better. It is of course based on John Steinbeck’s 1937 novel which is also a great read. 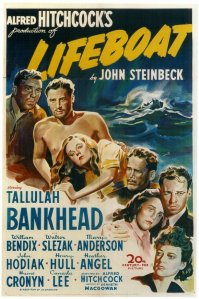 Lifeboat is one of Alfred Hitchcock’s most interesting works. It could easily be dismissed as being anti-Nazi propaganda, but in my mind this is more than just an anti-German film. It was released during World War II and there are some scenes where Walter Slezak’s German U-Boat captain Willi comes across sympathetically, but by the film’s conclusion we are in no doubt that he is nothing but a heartless barbaric monster. Apparently Hitchcock had conflicting views on Germans during the war, as he loved German expressionist cinema, which is where he learnt his trade, but he hated the Nazis and their atrocities. Also Hitch’s Britain was at war with the Nazis, struggling to survive the German onslaught.

The film really has nothing to do with the war, except on the surface, and is best viewed as a character study of what lengths people will go to when put into a life or death situation. That Willi is such a villain is not really the point of the film, as we see that when the tables are turned, that good people who are not indoctrinated in Nazi fanaticism have the potential to become monsters too, if that is the only way for them to survive. When faced with death, or at the very best internment in a Nazi concentration camp until the end of the war, we see the characters emotions’ laid bare and how their actions change, depending on the hopelessness or otherwise of the situation until in the end, they commit an act of murder just the same as the ‘evil’ Nazi.

The film at times feels very claustrophobic, being as it is set for its entirety on a lifeboat. There are a few good performances from Tallulah Bankhead and especially Canada Lee as the only real voice of reason. Hitchcock also has a very memorable cameo, and he was nominated for an Academy Award for best director for this film.

* Purchase the Region 1 (North American) version of Lifeboat from Amazon *