I enjoyed watching Toy Story 2 even more that the original. Again there is some top notch animation from Pixar and the characters are warm and relatable. A lot of the time you forget that they are not real but are images on a screen. 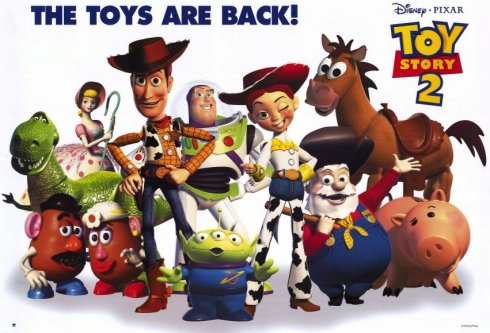 Woody and Buzz are back and teaching the importance of friendship. I like the inclusion of Jesse the cowgirl, as voiced by Joan Cusack and Stinky Pete the Prospector, voiced by Kelsey Grammar.

Again it is a great film by Pixar with really lovable characters. It is very funny and is suspensful at the same time.

Toy Story was the first feature-length CGI animated film and unlike Dreamworks’ Shrek, it doesn’t feel dated at all. I think that this is the great thing about Pixar in that they don’t just concentrate on pop culture references or fart jokes (unlike Dreamworks) but actually create characters that an audience can care for and a story that is engaging. It’s a bit hard to review Toy Story as it is a film that almost everyone has seen and I am sure enjoys. There is a lot of great humour and the characters, such as Woody, have real emotions that we can really empathise with.