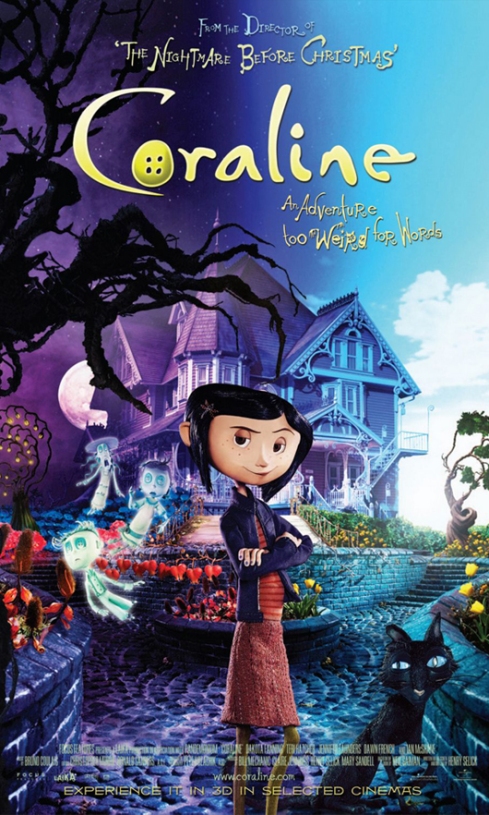 I love stop motion animation. I think that it is fascinating to think that the animators are able to painstakingly pose and film lifeless puppets so that on film the look like they are real living things. It is really quite amazing and I think that I appreciate this form of animation even more than the traditional ink and cell form that was the dominant form of animation until a decade ago. (I hope that all makes sense!) 2009 saw a bit of a renaissance for stop motion animation with both Wes Anderson’s Fantastic Mr. Fox and this movie, Coraline, being nominated for the Academy Award for best animated film. I haven’t yet had the opportunity to see Mr. Fox, but I have seen Coraline and think that it is very good.

The film is at times a little dark and really young kids may find it a little scary. I suppose that this perhaps to be expected as it is directed by Henry Selick, who previously directed Tim Burton’s The Nightmare Before Christmas and James And The Giant Peach for Disney and is based on a book by Neil Gaiman.

The plot involves Coraline, whose parents are too wrapped up in their own lives to take much notice of her. They’ve just moved to a new house where Coraline discovers a secret door to an alternate reality and her other family. This new family are just like her own but perfect, except for their button eyes. They cater to Coralline’s every whim, especially her Other Mother but things start change after Coraline wishes that she could stay with her other family forever. Upon hearing this the Other Mother states that if Coraline really wants to stay she should become just like them and allow her to sew buttons onto Coraline’s eyes. Naturally the thought of this revolts Coraline who then discovers that the Other Mother is really a monster.

The film is particularly creepy in parts, especially the character of the ‘other Wybie’, the other world’s doppelgänger of Coralline’s friend. Unlike the real Wybie the other one has had his lips sewn together so that he doesn’t speak. It is in my mind really amazing how this lifeless puppet can express so much emotion without speaking a single word. He does look as though his soul has been tortured whenever he’s on screen and expresses such a great mix of defiance and defeat that it is a great credit to the director and the puppet makers. It is here that it is easy to forget that this is a stop motion film and has not created using computer generated graphics. I can only imagine how painstaking the film-making process must have been to make the film this good.

There is but one criticism that I can level at the film and that is that the animation is not as smooth in some places as it should be. In a few scenes, mostly at the beginning of the film, the animation looks a little jerky, as if there are additional frames added to the film. I guess this was done to enhance the 3D version of the film but as I was watching the 2D version it just made the film a little jerky in places.

The DVD contains both the 2D and 3D version of the film and comes with those funky red/blue glasses that people in the 1950s used to use when watching 3D films, not the more modern Roy Orbison glasses that are used today. I still think that 3D is a gimmick and will die out unless some poindexter can invent a way to watch these films without the silly, uncomfortable glasses. It also doesn’t help when today’s cutting edge 3D filmmakers use cheap tricks like having objects fly at the camera for no reason at all  just because it is a 3D film. This sort of gimmick becomes boring after a while and is not so cutting edge, as the same thing used to be done in the 50s (House Of Wax’s scene with the spruiker batting the ball at the camera!!!). Anyway the rumour is that 3D is just a fad designed to get cinemas to update their projection equipment to digital and that in a few years it will go the same way as the first 3D era in the 1950s. I still laugh at the thought of people buying 3D TVs and hearing Gerry Harvey say that they are the way of the future. Sorry but I cannot really see people sitting around watching the TV with those ridiculous glasses on. 3D TVs will be just like those internet refrigerators that people like Gerry Harvey were predicting that we’d all have a decade ago.

After that rant all I can say is that  Coraline is a very good film and was worthy of its Academy Award nomination. It is a little scary in parts but it is very well made and enjoyable.