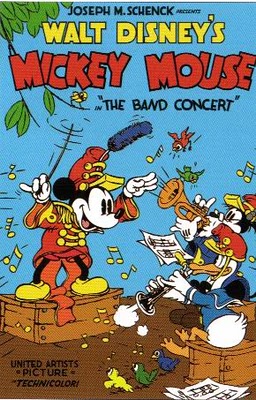 The Band Concert was the first ever Mickey Mouse cartoon in colour and it is probably my favourite Mickey cartoon. Mickey here is a supporting player in his own cartoon, upstage by his co-star Donald Duck several times during the film. This was just Donald’s third or fourth film appearance and he truly shines and shows off his comic potential. The cartoon has wonderful timing and the music is great too. Some of the animation is very beautiful too.  I try to watch this film every couple of months, so I put my Mickey Mouse In Living Color dvd on just for this occasion.

This is my final look at short films this week. They were such an important part of a movie going experience until 40-50 years ago but now it’s a rarity to see anything other than lame commercials before a main feature. Short films did find a new lease on life on TV, especially cartoons shorts and comedies by the Three Stooges and Laurel & Hardy in particular.