Greyfriars Bobby is the type of movie that doesn’t get made anymore. It is a sweet and sentimental film that never wears out its welcome. The movie is based on a true story from the 1860s, when a little sky terrier kept a vigil over his masters’ grave for 14 years until his own death. 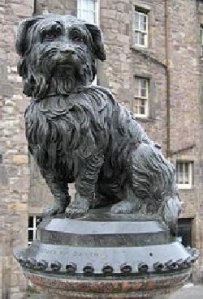 f Disney but has not be screened on TV for at least a couple of decades. I have watched this movie on DVD a few times since I bought it many years ago and it never fails to tear me up (shhh, don’t tell anyone). It is that kind of movie.

I also love the whole Scottish-ness about the film. It is set in Edinburgh and all the actors are Scots, which means that everyone has that wonderful Scottish brogue. Also, one of the main characters, John Trail has the most brilliant mutton-chops ever seen in motion pictures, which means that I must give the film some bonus points just for them.

As an aside, I wonder why movies about dogs don’t get made by Hollywood anymore. Back when I was growing up we had Benji, while before that there were many other canine heroes in Rin Tin Tin, Lassie and Old Yeller (which I will be watching very soon). It’s really sad as I love these kinds of movies.