By Millsie
Written by Barry Morrow & Corey Blechman
Directed by Anthony Page
Produced by Mel Stuart
Starring Mickey Rooney
Dennis Quaid
Largo Woodruff
Anna Maria Horsford
Harry Goz
Music by William Humeke, William Kraft
Cinematography Mike Fash
Approx. run time 100 minutes
Distributed by CBS Television
Country United States
Language English
Release date December 22, 1981
Bill is a movie that I watched several times when I was a kid. It is the story of Bill Sackter, a man who has an intellectual disability who lived in an institution for 46 years but is now living in the community trying to make it on his own. I think that it is kind of ironic that I watched this film so often as a kid as for the last fifteen years I have made a career working with people with intellectual disabilities.

Bill is played by Mickey Rooney, who won an Emmy Award for the role. Naturally he is not subtle with his playing of Bill but that is not so bad here. It’s hard for me to make an unbiased judgement of this movie though as I work with people with disabilities and can tell that reality is very different from the movies. I can see how the film tries to manipulate the feelings of the viewer but the story is quite compelling and Rooney’s overacting of the part helps us feel empathy for Bill. I know that there is a documentary about the real Bill Sackter that has recently been released but this is still an OK watch.

I’ve been watching professional wrestling ever since the first Wrestlemania back in 1984, so I am familiar with the sport/entertainment and some of the characters in it.
Whilst the movie is pure fiction and that Mickey Rourke’s Randy “The Ram” was never a real wrestler, I could see bits and pieces of other wrestlers in his make-up. There are several older past their prime wrestlers who still compete in school gymnasiums on the indy circuit. For example Abdullah the Butcher is 68 years old and still competes with no thoughts of retiring, while if you were one of the (very few) people who attended the Australian Hulkamania tour early this year you would have seen a main event consisting of 57-year-old Hulk Hogan and 61-year-old Ric Flair.
It is also very easy to believe that even a top wrestler from 20 years ago could now be broke, as evidenced by Ric Flair who rumour has it, never invested his money wisely, lived the lifestyle that he portrayed on TV, and has several ex-wives and children to support. Similarly Hulk Hogan has just been through a messy divorce and has tried to get his daughter into the music industry and has had to pay for his sons mistakes also.
It is easy to belive that a pro-wrestler could suffer from a heart attack despite being relatively (40s) young. Eddie Guerrero was just 38 years old when he died of a heart attack.
The best thing about the film is that the Ram character is believable and that the viewer believes that he could be a real person. We empathise with everything he is going through and we want him to succeed. He is not perfect but he is likable. I suppose that this film is very similar to Rocky.

Boys Town is a hard film to review for me because although I thought it was a great story, and Spencer Tracy’s fine portrayal of Father Flannigan was pretty good, there was one element that almost ruined the film for me. I am talking about Mickey Rooney’s performance as Whitey Marsh.

I have seen a few Mickey Rooney films and know that he can be quite a ham, but here his over-acting really affected my enjoyment of the film. The part really could have used a little subtlety instead of Mickey trying to steal every scene when he really didn’t have to. Perhaps I could put it down to him just being 18 at the time he made this film BUT… he had been acting in vaudeville and movies all his life so there shouldn’t be an excuse. Perhaps because Tracy’s  portrayal of Father Flannigan is very understated the director wanted to have the Mickster play his part way OTT. 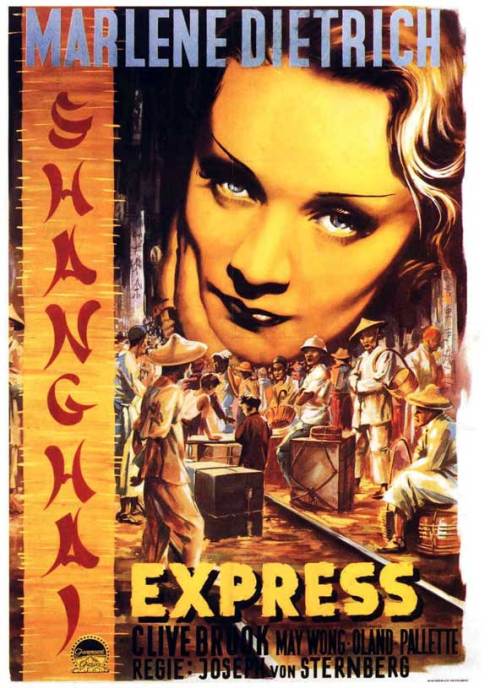 Shanghai Express is a very interesting film from 1932. Set in civil war torn China but filmed in Paris, it stars Marlene Dietrich as Shanghai Lilly. The film was directed by Josef von Sternberg and according to one review that I have read of the film, is meant to be a statement about the love between the fame director and his starlet. Of course rumours have abounded about another affair that the German actress was having with her co-star Anna Mae Wong. Who knows what really was happening behind the scenes.

Dietrich plays the coaster Shanghai Lilly, who has been breaking the hearts of men between Peking and Shanghai for five years, since her heart was broken by ‘Doc’ Harvey, a British officer who she meets up with while travelling on the train. Lots of critics have raved about her performance but she really doesn’t have that much to do. She spends some time looking glamorous and smoking a cigarette and smirking her way through her scenes looking as though she is about to burst into laughter but she is out acted by her co-star Anna Mae Wong, who despite being on screen for a much shorter amount of time has a far juicier part and more screen presence than Marlene.

Then there is Warner Oland as the evil rebel leader Mr Chang, who holds the train passengers for ransom and rapes (off-screen) Wong’s character Hui Fei. Oland is best known as being a caucasian actor who played many Asian parts, especially the famed Oriental detective Charlie Chan. He is thoroughly despicable here.

Shanghai Express was nominated for best picture at the 1932 Academy Awards and while it is very watchable and a very good film, and  Wong and Oland’s performances are great, I don’t know if the film is that great. As I said Dietrich spends most of her time mugging for the camera rather than really acting, while Brook’s performance as ‘Doc’ Harvey is rather wooden.

Movie Mania
Create a free website or blog at WordPress.com.