3 Ring Circus is the only Martin & Lewis film that is currently not available on DVD. I’m not sure why that is but I remember when I was a child that Channel 7 or 10 would show this movie over and over on a Sunday afternoon. It’s probably the Martin & Lewis film that I have seen the most times and despite not having seen it for a couple of decades (or more) I still remember parts of the film quite vividly. (Although I do remember seeing Hollywood Or Bust quite a lot of times on TV too!)

This is of course the film set in a circus where Jerry Lewis gets to don a clown costume and the boys get to duet on Puncinello. He dreams of being a clown but first has to earn his stripe in the circus by doing odd jobs such as training as a lion tamer or washing the elephants. It’s just an excuse for Jerry to display his goofy humour.

The film is not great but it is OK and better than a lot of other Martin & lewis films. As a kid I never noticed this but the film is very clichéd and the ending especially is very schmaltzy. This is at the orphans benefit where there is a little girl, in braces, who just won’t laugh at Jerry the clown no matter what he does. Personally I don’t blame her for not laughing at the clown as nothing he does is particularly funny, but the schmaltzy part comes when Jerry starts crying because of his failure to make the girl laugh, which causes her to laugh hysterically. One thing came across my mind as I watched this scene, perhaps the little girl is not really sad at all, maybe she’s just someone who cruelly gets her kicks out of the misfortune of others.

It’s also good to see Zsa Zsa Gabor, Kathleen Freeman and Elsa Lanchester in the film too, although with the exception of Zsa Zsa they are relegated to what are virtually cameo roles.

I have always been fascinated by circuses and clown in particular. I have always had a love/hate feeling for clowns and dreamt of being a clown when I was a kid, despite (or maybe because) of the fact that many clowns seem so evil. I always wonder just why they feel they need to hide their identities behind their makeup ala James Stewart in The Greatest Show On Earth.

I guess that this film could have been the beginning of the end for the Dean Martin & Jerry Lewis team as this seems to be the film where Jerry started to become a lot more self-indulgent with his comedy and takes up a lot of the spotlight, instead of concentrating on the equal partnership with Dean that brought him his initial fame. Dean is relegated to the background for much of the film. There also was allegedly a lot of tension on the set between Dean and Jerry and many people have speculated that this could be the reason why this film has never been released on DVD (or home video), although that does not explain why Hollywood or Bust is on DVD, as that is the final film the duo made and the one that Jerry has found too sad to watch. It would still be good to see released onto DVD as although it isn’t hilariously funny, it is still quite interesting and entertaining. Kids will probably love this film.

Robin And The Seven Hoods 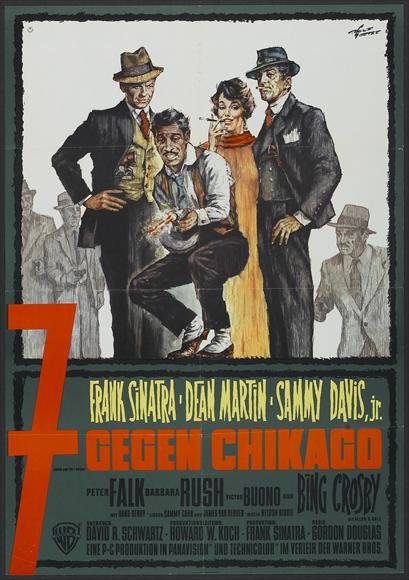 Robin And The Seven Hoods is nothing more than a vanity project for Frank Sinatra and the ‘Rat Pack’ in which Frank gets to fulfil his fantasy on screen by playing a gangster.
This movie is supposed to be a musical comedy but it’s really not that funny and with the exception of Frank singing ‘My Kind Of Town’ the songs aren’t that great. The film is a bit of a mish-mash in that it doesn’t know whether it is a film for adults with the gangster theme and talk about people being killed, or a family film with songs and a kid-centric sub-plot that is very annoying. The movie is still interesting in its own way due to the charm and personality of its stars Frank Sinatra, Dean Martin and Sammy David Jr., as well as Bing Crosby and Peter Falk. Like all ‘Rat Pack’ movies the guys basically just play themselves but here, with the exception of Frank, neither Dino or Sammy receive nearly enough screen time in my opinion. Peter Falk has more screen time as Dean and Sammy combined.

I guess that the really interesting story in regards to Robin And The Seven Hoods is what happened behind the scenes and why Peter Lawford was not a part of the film. He was scheduled to play the part that eventually went to Bing Crosby and was cut from the film by Sinatra because Frank felt that Lawford’s brothers’ in law, President John F. Kennedy and Robert Kennedy snubbed him by not staying at his house. The Kennedy’s were going to stay with Sinatra but got cold feet due to a few of Frank’s indiscretions and with him openly cavorting with real life Mafioso. Brother-in-Lawford was unofficially kicked out of the ‘Rat Pack’ and ostracised by Sinatra.

Overall the film is not great but it is watchable although it is probably half an hour too long.

This is another Martin & Lewis comedy from the mid-50s and while it has a few good gags I don’t think it was the teams best effort. Part of the problem was Jerry, who acts like he is about seven years old throughout the film. There is no empathy for him at all and he just does stupid stuff for the sake of doing stupid stuff.

This was made not long before the relationship between Dean & Jerry started hitting the rocks. I wonder if this film could be a reason, as Lewis did want to start taking more control of what he did while Dean only seemed to care about getting a paycheck.

Directed by Norman Taurog
Produced by Paul Jones
Written by Mervin Houser & Jerry Davis
Starring Dean Martin
Jerry Lewis
Distributed by Paramount Pictures
Release date July 25, 1956
Running time 91 minutes
Language English
This is the Dean Martin and Jerry Lewis film where they play cowboys. I think this is one of the better Martin & Lewis comedies, perhaps because Jerry isn’t as annoying in this as he is in many of his other films (he is still annoying though!). This was of course a staple of Sunday afternoon TV back when I was a kid in the 80s thanks to Bill Collins, but I haven’t seen it for a long time.

Even though some of the songs are kinda annoying it is still a good way to waste 90 minutes.

This is the film where Dean and Jerry break the 4th wall at the end to reassure their fans that they were going to make films together for many more years. Things didn’t pan out that way of course as they would only make one more film together, Hollywood or Bust. By this time they were fighting and I guess that the public must have known about it, which is why they tried to reassure them. I do know that during Hollywood or Bust they weren’t on speaking terms.

Firstly I must say that the original version of Ocean’s 11 is much cooler than the George Clooney/Brad Pitt franchise of movies from the 2000s. It doesn’t matter what anyone else thinks, but Frank Sinatra, Dean Martin and Sammy Davis Jr. are just so much cooler than George, Brad and Matt Damon. Even Joey Bishop and Peter Lawford are sort of cool, but perhaps the only reason for that is because they hung around Frankie and Dino.

This is not to say that the original is a great movie… it’s not even a really good movie as I undoubtedly think that the remake from 2001 is a lot better, it’s just that the Rat Pack are so much cooler than anyone else. It could be because they were just mucking around during the filming of this film and spent most of their time partying, or that Sinatra was a part owner of The Sands or that he was hanging around real gangsters.

I think that this is such a cool film perhaps solely due to the mystique of the Rat Pack. This film is so cool that Quentin Taratino paid homage in Reservoir Dogs. George Clooney may be considered cool to some, but he is just play acting when compared to Sinatra. The finale of the film has also become so iconic and is an instant image of the coolness of the Rat Pack. Who else would have their characters walk past a huge sign featuring their own names? I think that if you want to see how cool a film can be, just watch Ocean’s 11.

It also features a couple of Dean and Sammy’s hit songs too.

The film is just one big party rather than a movie. And you better believe that, Charlie!

Texas Across the River

Texas Across The River is an awful comedy western featuring two Rat-Packers in Dean Martin and Joey Bishop. It also features French superstar Alain Delon playing Spanish swashbuckler Don Andrea Baldazar, or Baldy as Dino dubs him. The film is just terrible, with Delon providing the only interest in it at all. I think the reason why I disliked this movie so much could be because of Joey Bishop’s performance as Kronk, an annoying Indian (native American) who is meant to be funny but like much of Bishop’s comedy is not. Dean as usual puts in as minimal effort as possible in his performance. Usually Dino is a really funny guy yet it seems obvious that this was nothing more than an easy pay check to him.

Sailor Beware is the fifth film that Dean Martin and Jerry Lewis made together. It involves them as a couple of guys who bring their hijinks to the navy when they enlist. Jerry plays Melvin Jones, who is the goofy boy who is allergic to girls (and everything else), while Dean is Al, the suave playboy crooner. Yep, they play the same characters that they almost always did. By this time they had gotten their shtick down pat. Jerry is still quite funny with what he does.

This is not to say that the film is bad, it just seems all too familiar, with very little deviation from the formula that had made Martin & Lewis the most popular comedy team in the world. There are a few funny skits, especially the boxing scene where Jerry has to fight against someone. The songs are quite bland and unmemorable, although the cameo by Betty Hutton does make the film a bit more interesting in the two brief scenes that she’s in. The film is worth a look, especially if you’re a fan of Dean Martin & Jerry Lewis even though there are better movies in their cannon of films.