The Untouchables is a very good picture about one man’s ruthless pursuit of justice at any cost. It is a semi-fictionalised account of Eliot Ness’ efforts in trying to bring down Al Capone’s criminal empire in the early 1930s, yet it is full of historical inaccuracies which do detract a little from the enjoyment of the film.

The main inaccuracy would be the portrayal of the death of Frank Nitti, one of Capone’s top henchmen. The movie depicts Ness throwing Nitti off the top of the courthouse during Capone’s trial, when in reality Nitti committed suicide in 1943, over a dozen years after Capone’s trial. (The only reason I know this is because I have watched numerous documentaries on Nitti and Capone on the Criminal Investigation channel!) De Palmer and Mamet are really taking liberties with the truth here.

Another thing I found a little incomprehensible is the fact that Ness would fight his battles with Capone and his cronies so openly and that many members of the public ended up becoming innocent victims. The prime example of this is the scene at the crowded station when they are trying to arrest Capone’s book keeper and a gun fight breaks out. Surely Ness and any other law enforcement officer would have tried to avoid this.

Robert De Niro’s portrayal of Capone is almost as a cartoon villain, although I am not sure if the reason for this is due to De Niro going over the top or the way it has been written. Sean Connery gives a good performance as Ness’ mentor Malone though, a role which won him an Academy Award for Best Supporting Actor, while Costner is alright as Eliott Ness.

The Untouchables is one of those popcorn films in which the best thing to do is to switch your brain off before viewing it, and to look at it as being just a piece of entertainment rather than being a serious look at a historical event. 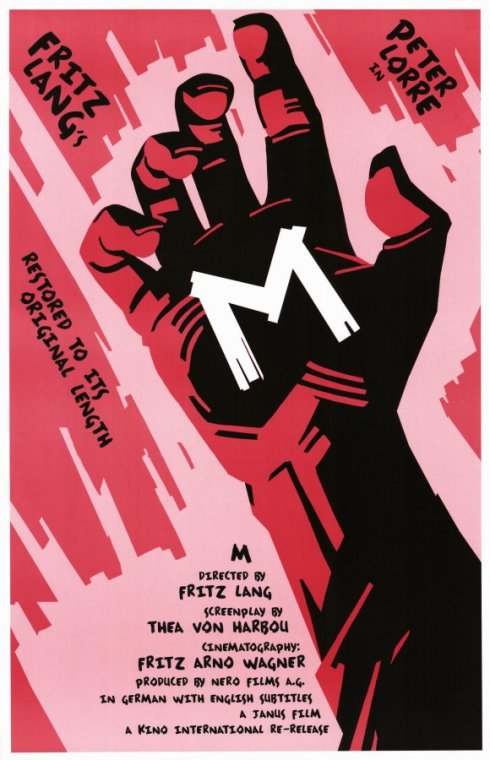 Fritz Lang’s M is an interesting 1931 German film. For much part it seems almost like a silent movie. It wasn’t uncommon for film makers in the late 1920s and early 1930s to add sound elements to what started out as silent movies, Hitchcock did this with Blackmail as did Howard Hughes with Hell’s Angels, as they tried to catch up with the boom in talkies in the aftermath of The Jazz Singer.That said, M has long stretches of silent scenes but as sound, or a particular tune, plays an important part in the picture it must have originally been conceived as a talkie.

The plot concerns the hunt for a serial killer who has been murdering young children. The police have hit a dead-end and have started targeting the criminal underworld in the hope that this will help them find the killer. What it really does is cause the criminals to take matters into their own hands so that they can get the police off their own backs and get back to business.

Peter Lorre is quite impressive as the serial killer even though he really doesn’t do much until near the end of the film when he is on the run from, and subsequently captured by, the underworld. It’s interesting to hear the emotion in his voice when he is pleading for his life and stating that none of his accusers know what it is like to be him.It is worth watching this film for his performance alone.