Song Of The South

Usually when you think of movies that have been banned the name Walt Disney doesn’t spring to mind. Most Disney films are sweet as saccharine but there is indeed one Disney classic that has been banned for the last two decades and has caused more controversy and differing opinions than any other film that I know of. There are many theories as to why Disney has imposed a ban on this film being released onto DVD  and I really don’t understand most of the speculation. Then again I am neither an American or an African-American and am not fully aware of the issues involved and so can only judge the film on its entertainment value and not its cultural or racial undertones. I will say that I don’t understand why a film such as Birth Of A Nation can be fr 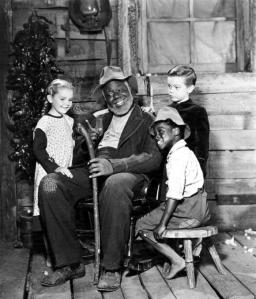 eely available to buy on DVD and shown (as of last Saturday on ABC2) on television yet Song Of The South is not, other than the fact that some people automatically associate the Disney brand name with entertainment for children. (Won’t we think of the children!)

Having watched Song Of The South I have to say that I really do wonder what all the fuss is about. I don’t think that it is blatantly racist at all. I know that the argument that African-Americans who don’t like the film use it that the film is set just after the Civil War and the abolition of slavery and that the black people seem to be happy to work for the whites and that their characters are mere stereotypes but then again that’s the way Hollywood does things. It could also be argued, I guess, that Disney’s films are set in an alternate reality where live action humans and cartoon characters interact. Everyone is happy in the Disneyverse despite what is happening in the real world. However the whites and blacks in this film are not equals and there is a clear line of power that is implied here. The black people are clearly subservant to the whites, except in the eyes of the children who treat everyone with respect.

One thing that I think is the real shame of this film not being able to be viewed is that now no one gets to see Jame Baskett’s performance as Uncle Remus. His performance exudes a warmth that is contagious. His role is also important in another way in that this would have been one of (if not the) first times that a black man had the main role in a film not targeted specifically to a black audience.

I think that Song Of The South is a typical Disney live action film in much the same vein as they would make a decade later, focussing on the lives of some kids and the trials that they have to face. The three animated scenes featuring Brer Rabbit, Brer Fox and Brer Bear are brilliantly done too. I don’t think that it makes any sense Banning Song Of The South, especially if more blatantly racist films are freely available to be released onto DVD or shown on TV. Then again this is my opinion.