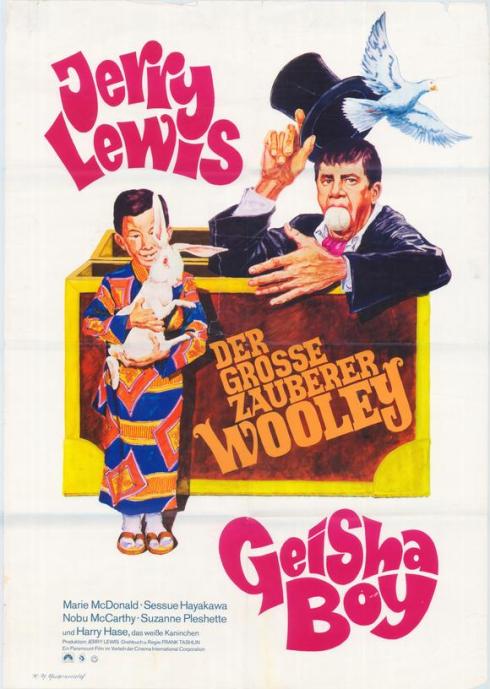 The Geisha Boy is another of those Jerry Lewis films that I would have watched several times as a kid. It is currently available on DVD for $5 from Big W. It is mildly entertaining, despite a few politically incorrect gags from Jerry. There are a few good gags with Jerry and his rabbit, although these do wear a little thin after the first half an hour of the movie. Thankfully after this point the rabbit jokes are used quite sparingly. The relationship between Jerry and the little Japanese kid is a bit schmalzty and the scene at Tokyo airport paints Jerry as being a huge jerk, but otherwise this is an amusing film that is quite enjoyable.

I can also see that Jim Carrey stole much of his schtick from Jerry Lewis by watching this film.

This entry was posted on Monday, October 11th, 2010 at 12:46 am and tagged with Arts, Business and Economy, California, Counties, Frank Tashlin, Geisha, History, Jerry Lewis, Jim Carrey, Los Angeles, Movies, United States and posted in 1950s, Comedy, Jerry Lewis. You can follow any responses to this entry through the RSS 2.0 feed.
« 3 Ring Circus
Westworld »

2 responses to “The Geisha Boy”