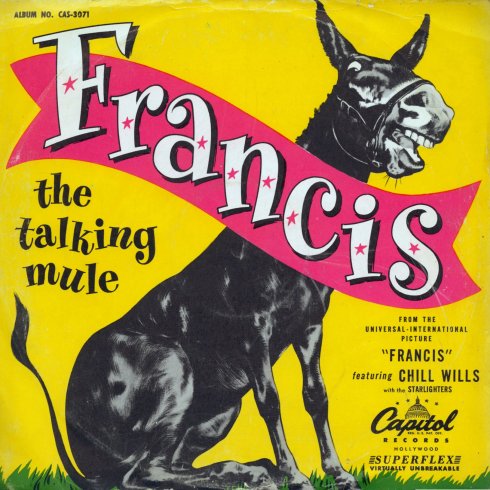 This is yet another of those films that I used to see all the time on a Sunday afternoon on Channel 10’s Golden Years of Hollywood, but never see anymore. There are seven Francis movies in all, but I think that the first one, the one that I watched today, is the one that was mostly shown on TV. The movie featured Donald O’Connor as a lieutenant in Burma during WWII whose life is saved by a smart-ass talking mule named Francis. Of course Francis was a precursor to the famous Mr. Ed who appeared on TV in the 60s.

I enjoyed the film a lot this time around and thought that Donald O’Connor was likeable as Peter Stirling. Francis naturally enough steals every scene that he (actually Francis was in real life a she) is in and the supporting cast is fine too. ZaSu Pitts, who the Olive Oyl’s cartoon persona was based on, appears here as does a young Tony (billed as Anthony) Curtis in a bit part.

Francis was popular enough to hve featured in another six films, as well as comic books and on a record album. As I mentioned earlier Mr. Ed was a show that was a lot like Francis and made by the same creative team.