The first 31 days of this 365 odyssey has just finished and I didn’t think that it would be so difficult. The movies that I have watched have mostly been very good, I rarely watch crap, but it has been very hard trying to organise this hobby around my work and home commitments. If you think about it, it is a very time-consuming task to spend at least an hour and a half to two hours watching a film and then spending another thirty minutes to an hour writing about the experience. Sometimes it feels a wee bit tedious and I have wanted to throw in the towel and give up on the whole project. If I feel this way after just one month I shudder to think of how I will be feeling come December 31st. (Probably relieved!)

Out of all the movies that I have watched during January the one that I disliked the most would have to be Sherlock Homes. Despite all the action on the screen by the second half of the film I was thoroughly bored and just waiting for the film to finish so I could leave the cinema. While some of the things I wrote at the time about the film were probably a little bit too harsh but I really hated this film. Robert Downey Jr. is a very good actor and I have liked lots of his films, yet his characterisation of Holmes was way off the mark. Downey Jr. portrayed Holmes as a half-witted genius who spent much of the movie fretting over the impending departure of Dr. Watson. This is just another big dumb movie with lots of generic action and stunts that will be forgotten in a few months.

The most disappointing film that I watched during the month of January was Winning. I was really looking forward to watch this film because I had heard lots of good reviews about it, but in the end it was all very boring. As I said at the time I write about this film is that the star Paul Newman had two great loves in his life, his wife Joanna Woodward and motor racing, that you’d expect a film combing Newman with the two would be enjoyable. This was not the case. The racing scenes that were taken from the 1968 Indy 500 are OK, but unfortunately they are spliced between pointless shots of Joanna and ‘John Boy’ from the TV show The Waltons. Most of the film is about the whirlwind romance between Paul and Joanna’s characters in which there seems to be no chemistry between the two stars whatsoever.

I think that it is much harder to pick the best film that I saw during the month. Perhaps that is because crappy films tend to stick in my mind much more because it is easier to remember my frustration and anger. There were many films that I really enjoyed.

The film that I thought was the most fun to watch would be The Adventures of Robin Hood. The actors in the film all looked as though they were enjoying themselves on the careen and that sense of fun was transferred to the viewer. This version of the Robin Hood legend is an all time classic, despite what Sir Ridley Scott thinks, and is hard to top. Russel Crowe will have to work hard to fill Errol Flynn’s boots later this year.

There were other fun films that I watched too. Ray Harryhausen’s brilliant stop-motion special effects made both The 7th Voyage Of Sinbad and 20 Million Miles To Earth so enjoyable to watch. Disney’s two live action films 20,000 Leagues Under The Sea and Treasure Island were both enjoyable too, due to the stars that were featured in those films. 20,000 Leagues featured Kirk Douglas and Peter Lorre but it was their co-star James Mason who stole the picture with his iconic turn as Captain Nemo, while Robert Newton was brilliant as Long John Silver in Treasure Island. Another film from the 1950s, the sci-fi movie The Day The Earth Stood Still was another film that I enjoyed immensely.

I watched quite a few comedies this month but not all of them made me laugh. W. C. Fields’ International House was just a long forgotten curiosity and not something that I’d watch again even though I did enjoy Gracie Allen’s performance, while I found Buster Keaton’s Steamboat Bill Jr. to be highly overrated, but this could be due to my over familiarity with many of the gags in the film, which have been since used by various other comedians. Then again this is also true of the gags in Chaplin’s The Gold Rush which I enjoyed despite my familiarity with the gags. I viewed two other Charlie Chaplin films, both of which I enjoyed, 1931’s City Lights and 1928’s The Circus.

Alfred Hitchcock featured prominently in the films I watched this last month. He directed Lifeboat, The Trouble With Harry and Sabotage whilst his influence can also be felt throughout Steven Spielberg’s directorial debut Duel.

Animation is one genre of film making that I really enjoy but I only watched three films that could be considered animation. The Princess & The Frog marked a welcome return to form for Disney while Pixar’s Up was brilliant and one of the best new films that I have watched for some time. The Puppetoon Movie was a great watch also but it really just whetted my appetite for some more of George Pal’s wonderful classic Puppetoon cartoons which have not been released onto DVD.

Here is a complete list of all the films that I watched this last month.

The Trouble With Harry 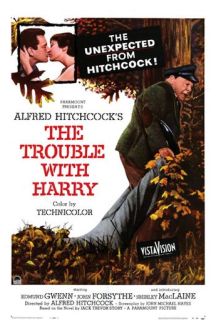 There are lots of clever and funny dialogue spread throughout the film, much of it very risqué for 1955 when the film was released. The cast is very likeable, especially like Edmund Gwenn’s as Captain Wiles and Shirley MacLaine (in her movie debut) as Jennifer.

The plot revolves around Harry, whose dead body is found by Captain Wiles who assumes that he had accidentally shot the poor unfortunate fellow. In fact three of the main characters in the films also believe that they are responsible for Harry’s untimely demise until… well if I told you about how Harry really died it would wreck the film for you!

The musical score by Bernard Herrmann is also very good and John Forsythe sings a song written by Raymond Scott, who was best known for composing Powerhouse, which was featured in many Warner Bros. cartoons.

The film was not a big financial success for Hitchcock when released in America but was extremely popular in Britain, Italy and France. After its initial release it remained locked away for thirty years, until it was released onto video in the 1980s. It is perhaps for this reason it is not as widely known as Hitch’s other films of this period such as Vertigo, Rear Window and North By Northwest.