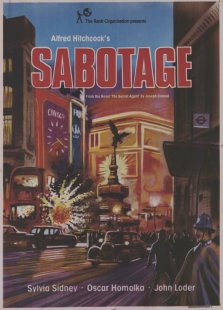 Sabotage is a 1936 film by master director Alfred Hitchcock. This movie, made in Britain four years before Hitch went to Hollywood, is quite eerie when watched from a modern perspective, thanks to its ending which sort of prophesied real life events some seventy years later. This film is a part of Force Entertainment’s Hitchcock Collection Volume 2, which can be picked up for around $20 from JB Hifi and KMart, although occasionally they have it discounted to just $10 in some stores.

The films starts quite slowly and mysteriously, as Hitchcock lets us in on the suspicious activities of cinema owner Mr Verloc, his wife and her brother. It seems that Mr Verloc may be a saboteur who was somehow involved in London’s recent blackout, but nobody knows for sure. Mrs Verloc is not wise to her husbands’ activities, although Scotland Yard detective Ted Spencer has the Verlocs and their cinema under observation and suspects that the Verloc’s could be terrorists working for a foreign power (the Nazis).
About half way through the film takes a twist, when Verloc’s co-conspirator tells him that he is unhappy with the only act of sabotage being the blackout and wants things to be more destructive. He instructs Verloc to go to collect a bomb to plant into the busy Piccadilly Circus tube station. Verloc protests that he doesn’t want to endanger any human lives, although it seems that he really doesn’t have a choice in the matter. He either does it or he will be killed. His hope to not hurt human lives seems almost noble here, even though Hitchcock does continue to portray him as the evil foreigner who cannot be trusted throughout the film, however it later seems that this humanity that Verloc has is simply a façade as he commits one very evil act that many will judge the entire film by.

The final part of the film is the most disconcerting and is what caused Leonard Maltin to dub this as the film in which Hitchcock took things much too far. Years later even Hitchcock said he was disappointed with the way things ended, as he realised that he built up the suspense for the viewer but did not give them time to catch their breath. Verloc instruct his wife’s teenage brother Stevie to deliver the bomb to its final destination, due to his discovery that Spencer has him under observation. Verloc does not tell Stevie what he is delivering, and Stevie just assumes that it is a film, which back in the 30s was very unstable anyway. All Stevie knows is that the package must be left in the cloak room at Piccadilly by 1.30pm. Unfortunately for Stevie he is delayed along the way and the bomb explodes while he is on a bus on route to the destination. What happens seems eerily similar to what occurred in London in 2005. Mrs Verloc finds out and ends up killing her husband whilst Disney’s Who Killed Cock Robin is playing in the cinema. Spencer discovers this but declares his love for Mrs Spencer and determines that they should run away, although Mrs Verloc wants to confess.

The bomb maker’s wife finds out that her husband’s bomb blew up the bus and that it may be traced back to him. He is instructed to go to Verloc’s to retrieve the evidence. When he gets there he finds that the police want to arrest him. He also discovers Verloc’s dead body and decides to blow himself up, making it impossible to know that Verloc was dead before the bomb went off. Hopefully Mrs Verloc and Ted lived together happily ever after.